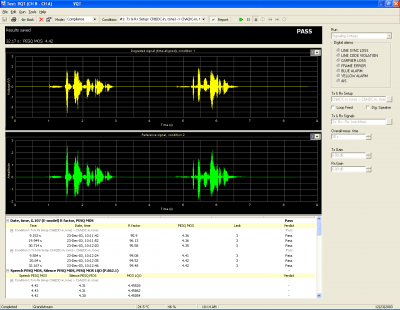 The most eminent result is the ITU-T P.862 PESQ MOS (Mean Opinion Score), it directly expresses the voice quality. The PESQ MOS ranges from 1.0 (worst) up to 4.5 (best).

Typical applications of VQT are VoIP, PSTN, ATM networks, Frame Relay, wireless equipment, and networks and handset and speaker phones. Of particular interest is speech quality assessment and analysis of compression and VAD codec’s such as those used in VoIP and wireless networks.

PESQ evolved from the need to automate the human listening tests (as defined in ITU P.800) and has introduced improvements to the older PSQM+, PSQM and PAMS methods.

The VQT measurements can be performed on any combination of the following TCA 8200 Tx – Rx ports: Analog, Acoustic, T1, E1, VoIP Ethernet except for T1-E1 and E1-T1 combinations. With TCA 4100, only Acoustic and VoIP cobminations are available. The analysis can be performed on-line and off-line (comparison of pre-recorded files).

Received voice signals can be recorded to wav files.

GET A QUOTE
Hermon Laboratories Ltd.

This website uses cookies to improve your experience while you navigate through the website. Out of these cookies, the cookies that are categorized as necessary are stored on your browser as they are essential for the working of basic functionalities of the website. We also use third-party cookies that help us analyze and understand how you use this website. These cookies will be stored in your browser only with your consent. You also have the option to opt-out of these cookies. But opting out of some of these cookies may have an effect on your browsing experience.
Necessary Always Enabled
Necessary cookies are absolutely essential for the website to function properly. This category only includes cookies that ensures basic functionalities and security features of the website. These cookies do not store any personal information.
Non-necessary
Any cookies that may not be particularly necessary for the website to function and is used specifically to collect user personal data via analytics, ads, other embedded contents are termed as non-necessary cookies. It is mandatory to procure user consent prior to running these cookies on your website.
SAVE & ACCEPT